Born in Western Pennsylvania, Mike developed his love for the outdoors like so many others by hunting small game and deer during hunting season, fishing during the spring and summer, and scouring the pages of Outdoor Life, Field and Stream, and the Cabelas catalog everyday in between. Later on he would go on to study Animal Science and Ag Business at Penn State University. This was the start of his effort to see if a kid from the suburbs could build a cattle herd in the West while simultaneously pursuing his passion for the outdoors. Heading West after his last final, Mike jumped on a wheat harvest crew and landed in Montana at the end of the season. With nothing but a pickup and two rifles, he set out to reach his goal. Working various jobs over the next 6 years and gaining knowledge in animal nutrition, finance, range management, and business management he was able to secure a Ranch Management position on a large property. There he began realizing his dream as he began building a herd and refining his outdoor skill as required by the nature of the operation.

In 2011 he graduated from Colorado State University with his Masters in Integrated Resource Management in an effort to better understand how to sustainably incorporate the livestock, wildlife, recreational, environmental, and aesthetic resources of a property and how to develop those resources to achieve desired goals.  Through this new knowledge and the daily education from the school of hard knocks, Mike built one of the premier commercial cattle herds in the U.S. and thus satisfied his original goal set so many years ago.

Not one to miss out on adventure, Mike sold the herd and, with his wife and two girls, headed to the Ozarks in southern Missouri.  This new endeavor sought to experience first hand the extreme conditions and challenges presented in this high risk Fescue country where many have failed and success can be fleeting. The Ozarks' beauty is only rivaled by the harshness of that environment when raising livestock and trying to dig out a living in the rocky landscape.  What was discovered though was a Mecca of outdoor recreation and unlimited opportunities for the outdoor enthusiast. 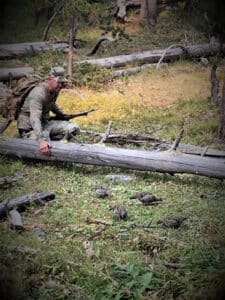 Mike soon found himself trying to develop these outdoor opportunities and incorporate the raising of livestock to help realize the full economic potential of the Ozarks and other similar regions. After much trial and error, Hunt And Release Technique was developed. This technique provides unlimited recreation opportunities without removing the resource and all the while helping to supplement the livestock base of the region. Mike now intends to apply this technique all over the globe to help benefit the sport of hunting, local communities, wildlife resources, and conservation efforts. So join him on this new and exciting adventure. Where this all goes remains to be seen.  However, just like his journey thus far, it is bound to be a heck of a ride.